Here’s my contribution to this year’s Golden Pints. 2016 has been a weird year, both for beer and for me personally. I think my consumption has completely changed. Overall it has been a nice time.

This is where one of the biggest changes in my consumption has happened. Since leaving the Hanging Bat in May my cask consumption has nosedived. That said, Swannay’s Orkney Porter on cask is a very special thing to behold, so it takes the award.

What UK keg beer have I drank most of? Probably Thornbridge Lukas, which for my money (literally) makes it the best. As with last year, the sheer calibre and quantity of amazing UK keg beer makes this impossible to pin down.

In many ways this has been a rough year for bottled beer in the UK, with many breweries, and most consumers, abandoning the format altogether. However, the Burning Sky Flanders Red, was a real banger. Although I would say the UK Bottle that I’ve enjoyed and bought the most of was Tempest Bomber.

I would argue that 2016 was also in some ways, quite bad for UK canned beer. Still lots of squashy, cheaply packaged, oxidised garbage going in to aluminium. But the majority of it was amazing. Magic Rock Cannonball has brought me some wonderful times in 2016, can we call it a classic yet?

2016 was a great year for overseas beer travel for me. However, the best Overseas Draught I had was actually sampled at Fynefest on the bar run by Ma Che Siete Venuti a Fà. Vento Forte C.A.L. was a huge influence over the weekend. In bizarre conditions it had ended up being air-freighted over and was in absolutely perfect condition. This beer made me speak Italian, which is really cool.

Mikkeller/Lindemans Spontanbasil has still had an enormous presence in my life this year. However, Cantillon Lou Pepe Kriek, is proof that there is a benevolent deity somewhere in the universe. This is their way of teasing us, by giving us a tiny glimpse of a beverage so pure and magical that humanity is simply unable to consume it or fully understand it. I also had a truly special experience with a bottle of The Rare Barrel Home Sour Home on New Year’s day. It was pretty emotional. Would also like to give a big shout to to ‘House Gueuze’ AKA Lindemans Cuvée René. The value for money on this is a nonsense.

I owe a lot of 2016 to Schofferhofer Grapefruit, a stupidly fun beer that can cure all ailments. I haven’t really accessed a great deal of Overseas tins this year, but very recently did a tremendous Trillium tasting.

No question, Cantillon Lou Pepe Kriek. I’ve been blessed with this beverage in different vintages at both the high and low points of 2016. Each time it helped me to transcend this earthly existence, become one with everything, and realise that life is good.

I’ve enjoyed watching the continuous evolution of Cloudwater’s stuff. But for the second year in a row Magic Rock snatch it, with the new direction taken for the 500ml tallboys. A very honourable mention for Pilot’s dotty banner, which was on display at Craft Beer Revolution in Edinburgh. Top trolling, but also looks nice.

I’m going to go with a personal design here. In May of 2016 Hibs won the Scottish Cup for the first time since 1902. To celebrate this feat I shared a Cantillon Cuvee des Champions (Hibernian FC edition) with my friend Colm. 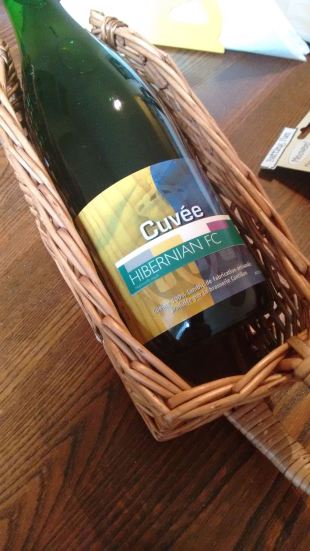 I think that Buxton have stuck their nose in to first place here. A core range that is never anything worse than great, and a thought-provoking range of specials. Probably also due it for their work on/with Omnipollo’s beers. Such a challenging category though, 2016 will go down as an incredible vintage for Cloudwater, Burning Sky, Mad Hatter, and countless others. UK Brewing had a real corker of a year.

Subcategory of best in Scotland: Tempest. The move to the new facility has given Tempest an opportunity to spread  and really start playing with styles and ageing. Another great year at Pilot and Fallen too.

It is quite difficult to put an answer to this, my heart screams Cantillon, but that would be boring, right? My head says The Rare Barrel, but can I genuinely suggest that only having had two of their beers?

In terms of liquid, building, and operations, Uerige in Dusseldorf was a mind-blowing place to visit. A fairly modern brewhouse built in the most impossible building conceivable. They still use a coolship, open dairy-style wort chiller, and open fermentation. Craft off the chain.

Pub/Bar of the Year

In terms of the UK, it’s got to be The Free Trade Inn for me. If I’m lucky I get down there once a year but it is a truly special place. Commendable note to the nearby Cumberland Arms.

Scotland sorely needs somebody to come along and change things up a bit (Anybody got any cash, and no desire for profit? If so apply within).

In Edinburgh this year we finally got our Six Degrees North, which is wonderful to have (as did Glasgow). Edinburgh sadly lost Blackfriar’s, one of the city’s best loved hostelries, but Salt Horse has done a rather fine job filling the niche. However, I’m going to be obtuse and spring for a bar that has truly begun to come into it’s own this year after coming under new management in late 2015 (I think), Brauhaus in Edinburgh. I’ve not had much chance to check out new openings from further afield, for that I apologise, mostly to myself.

Beer Festival of the Year

Cantillon Quintessence is now marked in my biannual calendar, this was a really wonderful experience. Only €35 for somewhere in the region of 25 different lambics, many of which came with matched canapés. I’d genuinely have paid €500 for the experience. I’d like to give an honourable mention to Craft Beer Revolution in Edinburgh. Most of the punters were not from ‘the beer scene’, lots of rock solid beer. Craft Beer Calling, now in the new Wylam brewery was tremendous and a firm fixture in my calendar. Copenhagen Beer Celebration was a bit off the boil for me this time round. Fynefest is worth putting in your diary. It’s a beer festival, except it’s not. Amazing music, food, camping, and company, there just happens to be exceptional beer everywhere.

Supermarket of the Year

I live in Edinburgh so have absolutely no reason to buy beer in a supermarket.

Independent Retailer of the Year

As mentioned above (and last year), Edinburgh is blessed for indie bottle shops. Still no beating Cornelius. A big shout to Abbiecraig Services for spreading the good word far and wide in the Central Belt, and also the amazing Valhalla’s Goat in Glasgow.

Online Retailer of the Year

This year has been challenging financially so the online orders have been minimised. However, Être Gourmet still smash it, as do Belgium in a box. For transaction of the year it would probably be the case of Horal Megablend I bought through Het Huise Van de Geuze.

Keeping up with the way I worked during my literature degree, I’ve barely read a book this year.

Still not really reading or generally enjoying beer blogs. I’ve enjoyed some of the output from Mark Johnson though. I’d probably also put in a shout for the top content produced over at Tasty Beverages too. Big love to all dem Beverators.

@pilotbeeruk In a whole year nobody has been able to come close, imitations are pale and shabby in comparison.